When an installer designs a custom multiroom music system for a client, he starts with choosing a vendor's base system that he is familiar with and adds elements from that same vendor or complements it with third party equipment. to fulfill the specification.
Each project has its own particularities, because of the size and layout of the rooms, the quality levels expected, the difficulty to embed high-tech gear into building structures, the budget allocation, etc.  Most installers who have travelled the road of custom system design know that to to deliver a flawless system which goes beyond customer expectation, a far greater effort is required from their imagination  than the product vendors would like you to believe when you browse their commercial and technical litterature.  And they also know that at some point, there is no going back on a flawed design.  That's why we thought it would be interesting to list the basics do's and don'ts and to bring good value advice in the format of a two-sheet whitepaper by stepping into the shoes of the installer.

The first challenge is called "deadline".  Does it sound familiar:  the customer has a hard time making up his mind amongst the multiple possibilities, he does not want to commit to a firm budget,  but he is giving you the time of day because tomorrow the plasterers are coming in and day after tomorrow the decorators.  How and where do you pull cables, which cables, how many, where do you plan wall outlets, panels and controls,  in a way that you leave all your options open for choices that have not been made yet or that may change in the course of the project ?
Actually, this part is not so difficult:  have a good look at all multiroom systems on the market, you'll always notice three basic ingredients:  control panels, outlets to hook up speakers and outlets to connect music sources.  Amplifiers and hubs are usually located in a central communications cabinet.  That's what you need to define a generic cabling plan for.

Let's start with the loudspeaker cabling.  Sounds trivial, but this is the area which is most overlooked and sinned against.  At the same time the area where most fables are told and myths exist.

Which cable should one use?  Which wire section? Loudspeaker cable transports high power low frequency signals that end up at low impedance loudspeakers.  This is per definition an environment which is insensitive to disturbances.  Choose preferably flexible red/black PVC cable with a section that depends of cable length and the speaker's impedance. (cfr the table below)

But doesn't the musicpower come into this equation?  Yes, but only in asecond order and the table already accounts for it.  A cable with a section of  2x 0,75mm² only represents a 20% loss at a length of 20meter into a 4 Ohm loudspeaker impedance.  This loss is easily compensated by turning up the volume just a little bit.  If you wanted to heat up this cable just a few degrees by music power, a continuous power of 1000 Watt or a music power of 5000Watt would be required... let's not forget we are discussing domestic use.    The real limiting factor is acoustic distortion.  When the cone of a heavy woofer swings back from maximum excursion, it is braked on its return by the its own impedance, the very low impedance of the amplifier's output stage and the cable in series with it.  If the cable impedance becomes too high, the loudspeaker does not get proper damping and the low frequencies sound "wet".  The values in the table below show the maximum lengths whereby the cable adds 20% to the speaker's impedance, which is barely noticeable, all the more because most in-wall or in-ceiling speakers don't have a frequency response that goes far below 80Hz.   As a default wire size, we would recommend 2x1,5mm² unless very expensive speakers with very low frequency response justifies a thicker gage.

Should you buy the much advertised oxygen-free copper cable (OFC)?  In our opinion this is more a cosmetic than technical choice, judge for yourself if the difference in price is worth the premium price.
What is however of the utmost importance is the quality of the connections.  The resistance between conductors should not increase over time or erratically (e.g. by oxidation), otherwise there is a risk of crackling noise by power transients, potentially harmfull to loudspeakers and amplifier alike. The wires should preferably be fitted with shrink bushings, coated with a non-oxidising layer, or the wires themselves should be silver-coated.  The wire ends are then connected by sprng-loaded contacts (speakerterminals, bananaplugs, binding posts, etc).  Screw-type connections are not advisable because they don't compensate automatically for the sagging of the wires caused by copper flow under pressure.

To where does one run the loudspeaker cables?
The purpose is off course to end up where the loudspeakers will eventually be mounted.  This turns the question into: what is the best position to mount the loudspeakers?  There is no single answer to cater for all situations, but with a little logic you go a long way.  Loudspekers hould try to reproduce as accurately what microphones recorde in the first place and they should restitute as accurate a sense of spatial position of the sound sources as possible.  Ideally one should place the loudspeakers at ear's level and orient them in such a way that the listening spot is symmetrical between the loudspeakers. A wall or ceiling near the loudspeaker will reverberate and boost the low frequencies in an unnatural sounding and unpredictable way.  This is why loudspeakers are by preference not close to the floor and at least half a meter away from any corner because in corners the reverberations of waals and ceilings interfere, resulting in a very hollow sound. 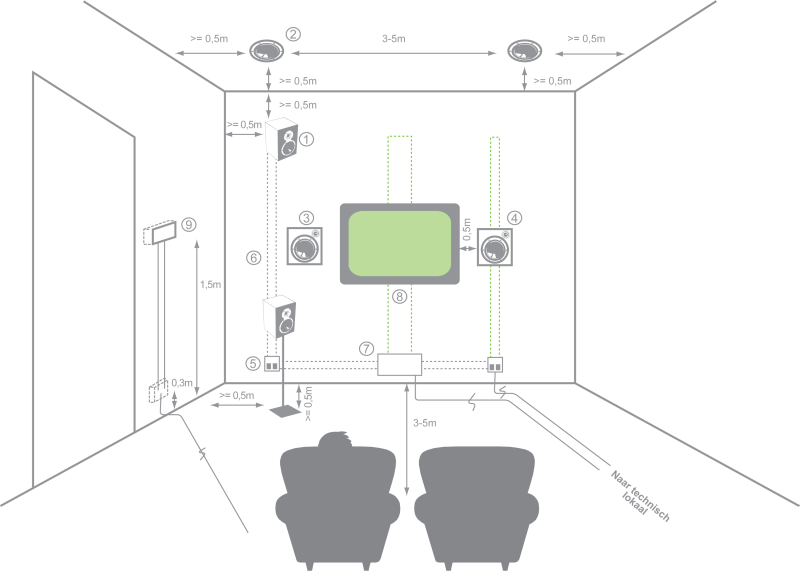 If you want to place on-wall speaker high up (1), for the same reasons one should stay at least half a meter away from ceiling and walls.  In-wall and in-celing speakers have been designed to radiate from a flat surface, but again, the mounting recess should not be closer than half a meter from adjacent planes.  In-ceiling speakers (2) are incapable of rendering a faithfull stereo image because of their orientation, but they are often chosen for esthetic reasons.  If you have the option, choose a speaker model with a tweeter that can be pointed to the listening spot.  In-wall speakers (3) are often combined with a flat-screen. Position them at equal distance to the left and right of the screen, at the center of the screen's height, and at least 2 meters from each other.  The central speaker can be mounted just below the flatscreen.  Our ear can not distinguish the location of origing of low frequencies too well, therefore the placement of a subwoofer is not at all critical (under a cupboard, under a sofa,...).  Outdoor loudspeakers come as on-wall models with a mounting bracket, or standing models in all shapes and colors (rock, mushroom, gnome,...)  When mounting on-wall speakers fitted with a bass-reflex port, mind the vendor's instructions to avoid the port serving as a collector for rain.

All these recommendations don't solve the problem of the client who caanot make up his mind about the choice of multiroom system.  How do tacklle that?  In-wall or in-ceiling has to be decided up-front in the case of concrete structures because a cavity has to be made when pouring the concrete.  The level of mounting in hollow walls or mounting on-wall can be decided later on by following tip: run the cables (5) to a wallbox, each at least half a meter away fom the adjacent wall and at the standard height of power outlets (eg 30cm).  Provide a conduit with a diameter of approx 20mm at the vertical of the wallbox, all the way to the ceiling (6).  It is then easy to access the conduit at any give height by the use of a drill bit  and to feed a length of cable to the wallbox.  The same trick can be used for the ever more impressive wiring behind a modern television screen. Mount a large wallbox (or floortank) (7) at 30cm height to fit the mains, TV and network connections in and work a large flat-section conduit (8) into the wall at the vertical of the connection box. The opening inthe wall can now be made only after the mounting brackets for the screen have been fixed, and the height of the opening adapted to where the connectors of the screen are accessible.

Wiring up the control panels 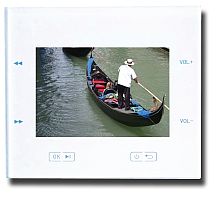 In these days of in-wall docking systems for iPad and Android tablets, why bother to wire up the controls if they have wireless on board?  Because the uptime and response time of wireless is known to be less than optimum. It can be caused by other wireless apps demanding higher Quality of Service (QoS), channel conflicts between wireless devices, or just the router hanging.  Not the best way to go if this is the only device capable to shut down or mute the sound of the system when the phone rings... This calls for a dedicated always-on control device.  The control panel can have several functionalities, depending on the selected brand and price bracket, and range from a simple voume control, a push-button panel (eventually linked with the lighting control system), a touchscreen, or a built-in radio or mediaplayer.  Connection ports can be provided to allow the use of an external source like MP3 player through a stereo jack or through a USB and/or SD interface.  Choose the most convenient location depending on the room's layout and embedd a double backbox (9).  unless the builder has different requirements, a logical place is at 30cm from a doorstyle, at a height of 1,5 meter.  That height is a good compromise for small and tall people.  Run a high-quality shielded four-pair multimedia cable to the comms cabinet.  Follow the system vendor's minimum spec for the multimedia cable, or to cover for all possible scenarios, at least a quality Cat6 SFTP or even better an RF-grade Cat6 F²FTP.  Coil up the overlength in the backbox for future use.  If the choice of control panel has not been made yet, the wallbox can be sealed off with the proper blind plate and painted over.  Carefully mark the location on your plans.

Loudspeaker cables and multimedia cables now end up in the technical area.  One has the choice to implement the terminations inside a bulky 19" cabinet or shallow DIn-rail cabinets.  The choice for a 19" cabinet is obvious when budget is no object and large servers and ventilation have to be built-in anyway.  For a more standard installation, choose a DIN-rail cabinet with at least 30% extra space for future extensions, and a provision to host router, NAs and other common devices, either on a mounting board of at least 30x30cm, or on a device receptacle attached to a spare DIN-rail.

The shielded multimedia four-pair cables are terminated onto correspondingly high-grade RJ45 connectors.  The loudspeakercables can be terminated on spring-loaded binding posts or connectors.

Our recommendation is not to group the cables by type, but to group them according to room.  This is easier to document and more intuitively recognisable at later interventions.

If you have followed these recommendations and have prewired the rooms and the technical room in this way, it will tkae you a long way to quickly implement and commision the multiroom system that has eventually been chosen.  Extra wiring and fitting work will be kept to a minimum.  This approach also leaves the door open for a system that is gradually implemented, starting with some rooms and adding extensions later on.  We are all familiar with the fact that at the finishing stage of a project the builder's budget can run thight and the multiroom system can be scrapped off the wish list.  But provided cabling is in place, he can reconsider his design a few years down the road when his finances are back on track.  He will then fully appreciate the foresight of prewiring properly.